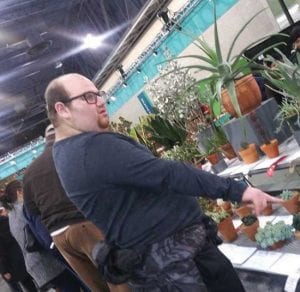 The highlight of Gavi Littwin’s visit to this year’s Philadelphia Flower Show was not the fact that he went with three dates: his mother, Jodie, his grandmother, Elizabeth, and his behavior technician, Courtney. It was the fact that Littwin, 21, had his own plant featured in the showcase. As part of his program with Connect Plus Therapy, which provides Applied Behavior Analysis (ABA) for young people on the Autism Spectrum, Littwin, who was diagnosed with Autism at age two, along with a small group of other young men aged 20 and above, spent 14 weeks preparing their entries for the Flower Show. Their weekly meetings included learning about three different varieties of plants, caring for their own plants, and writing emails to the Philadelphia Horticultural Society to enter the show and confirm the necessary details. Seeing his plant at the show was the culmination of months of hard work, a moment that Littwin says made him “feel proud.”

While he’s now made his mark in the horticultural world, Littwin has long been a staple of South Jersey’s Jewish community. A longtime member of the Katz JCC, Littwin has been involved with ACHaD, the JCC’s Special Needs Department, for many years. He’s also connected with the Jewish Abilities Alliance (JAA), which is run through Federation. Every Monday, he can be found in the gym, playing basketball, and on Wednesdays he attends an ACHaD fitness program. Thursdays are his social group and swim.

“I like exercising and swimming,” Littwin said. In the summers, he attended the JCC Camps at Medford.

“The JCC is a big part of his life,” said his mom, Jodie. “He’s like the mayor there; everybody knows him.”

The same can be said of the members of Sons of Israel, where Littwin has been active since his early childhood. “I like going to shul,” he said. When he was younger, Littwin had the job of changing the page numbers on the sign at the front of the sanctuary so that all members could follow the service. Since becoming a bar mitzvah, Littwin is regularly invited to the Torah for an aliyah. Though he can’t read Hebrew, he knows the prayers by heart.

“I really feel like Gavi, and all of our special needs kids, have a totally different spiritual side to them that none of us could ever touch,” Jodie said. “Gavi perceives things differently. I think there’s a whole different level there.”

Also on a different level are some of Littwin’s “splinter skills,” or special abilities, particularly in mathematics and data analysis. He makes extensive calculations instantaneously and finds patterns within information. If you give him your birthdate, Littwin will tell you, within seconds, the day of the week you were born.

“Right now, we’re looking for someone to teach him coding, because that’s what his brain is doing automatically,” said Jodie. At Connect Plus, where his mother works as a parent liaison, Littwin assists with bookkeeping, perfectly running the numbers on excel spreadsheets. “The one time there was a mistake in the books,” Jodie said, “was the month that he didn’t do it and I did it.”

Littwin represents a unique demographic of young people who were diagnosed with Autism in the late 1990s and early 2000s, who are now Millennials in their late teens and twenties. Many of them can successfully attend college and join the workforce—with the right supports. “I’d like to go to college in the future,” Littwin said.

To increase opportunities for Littwin and those like him, employers are encouraged to reach out to the NJ Division of Vocational Rehabilitation Services or Jewish Family and Children’s Service, to offer work to these young adults with the help of a job coach. “Some of them are the best employees because they’re so dedicated,” said Jodie. “They feel special that they’re making a difference. It helps their self-esteem so much.”

Thanks to his and the group’s success at the Philadelphia Flower Show, their program will branch out to larger-scale gardening and sell their produce and crafts at a local farmer’s market. The mathematician-horticulturalist has one more ambition: “I’d also like to go to Israel again.”